This study examined the ability of executive functions (EF) to account for the relationship between Attention Deficit Hyperactivity Disorder (ADHD) status and social adjustment as indexed by parent and teacher report and by performance on a standardized observational “chat room” task. Children with the Combined subtype (ADHD-C; n = 23), the Primarily Inattentive Subtype (ADHD-I; n = 33), and non-ADHD controls (n = 36) participated. EF did not mediate the relationship between ADHD status and parent or teacher report of social adjustment. EF accounted for about 40–50% of the variance between ADHD status and the ability of children to detect subtle verbal cues as well as memory for the conversation in the chat room task, but did not mediate the relationship between ADHD and the number of prosocial, hostile, or on-topic statements that were made. Results are consistent with other recent reports, and suggest that the role of EF deficits in the production of social skill deficits in ADHD may not be as prominent as is typically assumed. The implications for the development of intervention programs designed to target core cognitive etiologic factors are discussed. 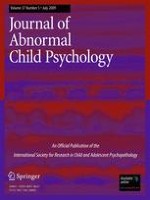 Equanimity to Excess: Inhibiting the Expression of Negative Emotion is Associated with Depression Symptoms in Girls

The Role of Harsh Discipline in Explaining Sex Differences in Conduct Disorder: a Study of Opposite-Sex Twin Pairs

Community vs. Clinic-Based Modular Treatment of Children with Early-Onset ODD or CD: A Clinical Trial with 3-Year Follow-Up