Despite increasing support for the distinction between primary and secondary variants of callous-unemotional features in children with disruptive behavioural disorders, evidence about whether emotion recognition deficits are only characteristic of primary CU is inconclusive. We tested whether, in young children with Oppositional Defiant Disorder (ODD; N = 74), level of affective arousal moderated the association between CU and performance on behavioural measures of emotional abilities. The association between CU and emotion recognition abilities was dependent on the child’s level of affective arousal with higher CU associated with poorer emotion recognition abilities for ODD children with lower affective arousal (r = − 0.49; p = .007) but not for those with higher levels (r = 0.03; p = .838). Our results replicate recent findings and give support to the notion that the primary CU variant is characterised emotionally by under arousal of affect, low affect dysregulation and impaired emotion recognition abilities. 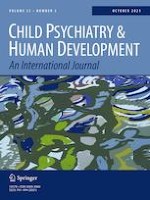 Your Fear is My Fear: The Relationship Between Parental and Offspring Anxieties

Adverse Social Relationships in Childhood: Are there Links with Depression, Obsessive-Compulsive Disorder and Suicidality in Adulthood?