Stimulus over-selectivity occurs when one aspect of the environment controls behavior at the expense of other equally salient aspects. Participants were trained on a match-to-sample (MTS) discrimination task. Levels of over-selectivity in a group of children (4–18 years) with Autism Spectrum Disorders (ASD) were compared with a mental-aged matched typically-developing group. There was more over-selectivity in the ASD group. When retention intervals were added between the sample and comparisons in the MTS task, both groups showed an increased level of over-selectivity, with the ASD group showing a more pronounced effect.
vorige artikel Brief Report: Platelet-Poor Plasma Serotonin in Autism
volgende artikel Brief Report: Association Between Behavioral Features and Gastrointestinal Problems Among Children with Autism Spectrum Disorder 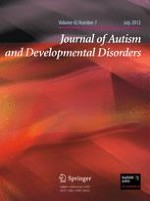