Autobiographical memory impairments in autism spectrum disorders (ASD) have been attributed to a failure in using the self as an effective memory organisational system. To explore this hypothesis, we compared self-defining and everyday memories in adults with and without ASD. Results demonstrated that both groups were able to distinguish between self-defining and everyday memories, although the ASD group generated fewer specific memories overall. Despite qualitative similarities between the narratives of the two groups, the adults with ASD extracted less meaning from their narratives. Difficulties in eliciting meaning from memories suggests a failure in using past experiences to update the self. We therefore propose that the self-memory relationship might be static, rather than dynamic, in ASD.
vorige artikel Brief Report: Signals Enhance the Suppressive Effects of Noncontingent Reinforcement
volgende artikel Sarah Attwood: Making Sense of Sex: A Forthright Guide to Puberty, Sex, and Relationships for People with Asperger’s Syndrome 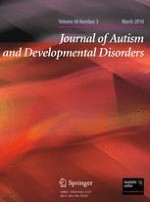 Theory of Mind in Adults with HFA and Asperger Syndrome

Psychotropic Medication Use Among Children With Autism Spectrum Disorders Enrolled in a National Registry, 2007–2008