This study aimed to explore the perception of different components of biological movement in individuals with autism and Asperger syndrome. The ability to recognize a person’s actions, subjective states, emotions, and objects conveyed by moving point-light displays was assessed in 19 participants with autism and 19 comparable typical control participants. Results showed that the participants with autism were as able as controls to name point-light displays of non-human objects and human actions. In contrast, they were significantly poorer at labeling emotional displays, suggesting that they are specifically impaired in attending to emotional states. Most studies have highlighted an emotional deficit in facial expression perception; our results extend this hypothesized deficit to the perception and interpretation of whole-body biological movements.
vorige artikel Brief Report: Brain Activation to Social Words in a Sedated Child with Autism
volgende artikel Brief Report: Recognition of Emotional and Non-emotional Biological Motion in Individuals with Autistic Spectrum Disorders 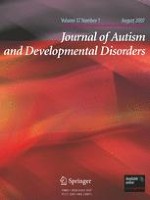 Individual and Marital Adaptation in Men with Autism Spectrum Disorder and their Spouses: The Role of Social Support and Coping Strategies