Children with Autism Spectrum Disorder (ASD) or Attention-Deficit/Hyperactivity Disorder (ADHD) are at increased risk for bullying victimization. School refusal is a ‘red flag’ for identification of bullying in children with ASD and/or ADHD. This study examined the impact of diagnoses, demographics, and school variables on school refusal due to bullying. Participants were 97 parents of 154 children with ASD, ADHD, ASD + ADHD, other diagnoses, or no diagnosis. Children with ASD + ADHD were most likely to refuse school due to bullying. Classroom aides and behavior problems were protective and risk factors, respectively. In the final regression model, child diagnosis no longer predicted school refusal. School refusal and problem behavior warrant consideration as a marker of distress for victimized children.
vorige artikel How is COVID-19 Affecting the Mental Health of Children with Special Educational Needs and Disabilities and Their Families?
volgende artikel The Importance of Professional Discourse for the Continual Advancement of Practice Standards: The RBT® as a Case in Point 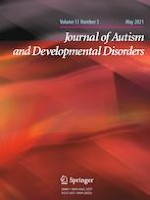 Does a Person’s Autism Play a Role in Their Interactions with Police: The Perceptions of Autistic Adults and Parent/Carers

Social Interaction Skill Intervention for Autistic Adults with Intellectual Disability and Limited Language: A Pilot of the SKILL Program

Concurrent Validity of the ABAS-II Questionnaire with the Vineland II Interview for Adaptive Behavior in a Pediatric ASD Sample: High Correspondence Despite Systematically Lower Scores

Correction to: Early Word Reading of Preschoolers with ASD, Both With and Without Hyperlexia, Compared to Typically Developing Preschoolers

The Importance of Professional Discourse for the Continual Advancement of Practice Standards: The RBT® as a Case in Point