The development of the personal past is complex, requiring the operation of multiple components of cognitive and social functioning. Because many of these components are affected by autism spectrum disorders, it is likely that autobiographical memory in children with Asperger’s Disorder (AD) will be impaired. We predicted that the memory narratives of children with AD, in comparison to typically-developing peers, would reflect less personal interpretation as evidenced by internal states language. Thirty children with AD and 20 typically-developing children aged 6–14 reported their earliest memories and two emotional experiences (one positive and one negative). Consistent with our predictions, children with AD included fewer emotional, cognitive, and perceptual terms than the comparison sample.
vorige artikel Design and Subject Characteristics in the Federally-Funded Citalopram Trial in Children with Pervasive Developmental Disorders
volgende artikel Brief Report: Mediation of Treatment Effect in a Communication Intervention for Pre-School Children with Autism 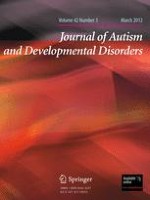 Brief Report: Life History and Neuropathology of a Gifted Man with Asperger Syndrome