We present a new analysis of Whitehouse, Maybery, and Durkin’s (2006, Experiment 3) data on inner speech in children with autism (CWA). Because inner speech development is thought to depend on linguistically mediated social interaction, we hypothesized that children with both autism and a nonverbal > verbal (NV > V) skills profile would show the greatest inner speech impairment. CWA and typically developing controls (n = 23 in each group) undertook a timed mathematical task-switching test, known to benefit from inner speech use. Participants completed the task with and without articulatory suppression (AS), which disrupts inner speech. The hypothesis was supported: AS interference varied with cognitive profile among CWA but not among controls. Only the NV > V autism group showed no AS interference, indicating an inner speech impairment.
vorige artikel Brief Report: Effects of Pressure Vest Usage on Engagement and Problem Behaviors of a Young Child with Developmental Delays
volgende artikel Robin L. Gabriels and Dina E. Hill (Editors): Growing Up with Autism. Working with School-Age Children and Adolescents 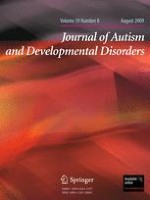 Developmental Trajectories in Siblings of Children with Autism: Cognition and Language from 4 Months to 7 Years