Individuals with Autism Spectrum Conditions (ASC) are widely suggested to show enhanced perceptual discrimination but inconsistent findings have been reported for pitch discrimination. Given the high variability in ASC, this study investigated whether ASC traits were correlated with pitch discrimination in an undergraduate sample when musical and language experiences were taken into consideration. Results indicated that the social skills subscale of the Autism Spectrum Quotient was associated with foreign speech pitch discrimination, suggesting that individuals who were less sociable and socially skillful were less able to discriminate foreign speech pitch. Current findings have an implication in investigating individual differences in ASC and further investigation is needed for spelling out the relationship between the non-social and social aspects of ASC. 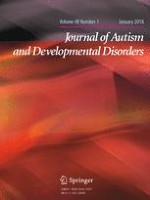 Transitioning Together: A Multi-family Group Psychoeducation Program for Adolescents with ASD and Their Parents

Parental Perceptions and Child Emotional and Behavioral Problems in Autism

Needs of Adolescents and Young Adults with Neurodevelopmental Disorders: Comparisons of Young People and Parent Perspectives

Delayed Diagnosis and Treatment Among Children with Autism Who Experience Adversity