A measure of social perception (CASP) was used to assess differences in social perception among typically developing children, children with autistic spectrum disorders (ASD), and children with Attention Deficit/Hyperactivity Disorder (ADHD). Significant between-group differences were found in recognition of emotions in video, with children diagnosed with ADHD or ASD performing more poorly than controls on measures of knowledge of nonverbal cues and emotional expression. The number of inattention symptoms was found to be a significant contributor to poorer video interpretation across diagnostic groups. An effect of attention on poor social perception was found that may be unique to the ASD group. Clinicians may overestimate the social deficits of children with ASD if they also have symptoms of inattention, while researchers may need to control for the effects of inattention in their studies.
vorige artikel Brief Report: Outcomes of a Teacher Training Program for Autism Spectrum Disorders
volgende artikel Rachel Forrester-Jones and Sarah Broadhurst, Autism and Loss 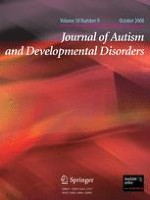