Self-injurious behaviors (SIB) are elevated in autism spectrum disorder (ASD) and related genetic disorders, but the genetic and biological mechanisms that contribute to SIB in ASD are poorly understood. This study examined rates and predictors of SIB in 112 individuals with disruptive mutations to ASD-risk genes. Current SIB were reported in 30% of participants and associated with poorer cognitive and adaptive skills. History of severe abdominal pain predicted higher rates of SIB and SIB severity after controlling for age and adaptive behavior; individuals with a history of severe abdominal pain were eight times more likely to exhibit SIB than those with no history. Future research is needed to examine associations between genetic risk, pain, and SIB in this population.
vorige artikel Brief Report: Social Behavior and Special Interests in the Stigmatization of Autistic College Students
volgende artikel Brief Report: Using Cognitive Screeners in Autistic Adults 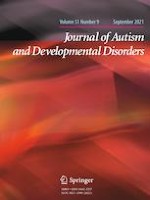 ‘At the End of the Day, It’s Love’: An Exploration of Relationships in Neurodiverse Couples

Are Children With Autism More Likely to Retain Object Names When Learning From Colour Photographs or Black-and-White Cartoons?