Social cognitive impairments in autism spectrum disorder (ASD) are well-documented, yet little research has examined whether ASD is also characterized by difficulties in meta-perception, or the ability to gauge how one is perceived. In this study, ASD and TD adults (N = 22) largely did not differ on the self-perception of their personality traits or on how they expected to be perceived by unfamiliar observers. However adults with ASD were rated less favorably by TD observers (N = 412) on 19 out of 20 personality items, and adults with ASD were less accurate at predicting how they would be perceived. These findings suggest impaired meta-perception in ASD that may serve as a potential mechanism through which reduced social cognitive ability contributes to social impairment. 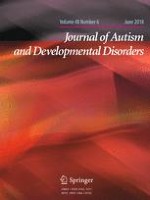 Is Older Age Associated with Higher Self- and Other-Rated ASD Characteristics?

Selective Impairment of Basic Emotion Recognition in People with Autism: Discrimination Thresholds for Recognition of Facial Expressions of Varying Intensities

Acceptance or Despair? Maternal Adjustment to Having a Child Diagnosed with Autism