There are obvious similarities between the cognitive constructs of Beck’s cognitive theory, the hopelessness model, and the response styles theory. No single comprehensive model has yet integrated the core cognitive concepts of these theories, however. In order to develop such an integrative cognitive model, we conducted two independent studies with 588 and 606 participants, respectively, from a university population. Both studies support the idea that all cognitive constructs of the three models are distinct from each other. Furthermore, both studies provide evidence for the possibility an integration of the constructs in one cognitive model. If future studies replicate these findings, the integrated cognitive model can provide a theoretical framework to better understand how therapeutic techniques derived from one model influence cognitive variables from another model. This might even allow for improvements in the effectiveness of psychotherapies by theory-driven combinations of therapeutic techniques that are based on different models. 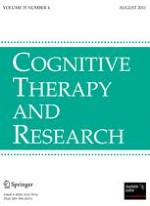 Explicit and Implicit Anxiety: Differences Between Patients with Hypochondriasis, Patients with Anxiety Disorders, and Healthy Controls

A Behavioral Index of Imagery Ability in Social Anxiety

The Utility of Measuring Explanatory Flexibility in PTSD Research

Memory for Physiological Feedback in Social Anxiety Disorder: The Role of Fear of Bodily Sensations