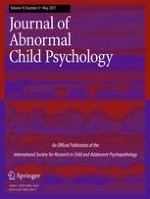 Prevalence and Correlates of Direct Self-Injurious Behavior among Chinese Adolescents: Findings from a Multicenter and Multistage Survey