We examined child behavior problems and maternal mental health in a British population-representative sample of 5 year-old children with an autism spectrum disorder (ASD), controlling for the presence of an intellectual disability (ID). Behavior problems were significantly higher in children with ASD with/out ID compared to typically developing children, but compared to children with ID only hyperactivity was significantly higher in children with ASD/ID. After controlling for ID and maternal mental health, the presence of ASD significantly increased the odds for hyperactivity, conduct problems and emotional symptoms. Negative maternal outcomes (serious mental illness, psychological distress, and physical health limitations) were not consistently elevated in ASD. The findings highlight the early age at which behavior problems emerge in ASD, and suggest that at this age , there may not be a clear disadvantage for maternal mental health associated with having a child with ASD in the family, over and above that conferred by child behavior problems.
vorige artikel Parents’ Reactions to Youths’ Hyperactivity, Impulsivity, and Attention Problems
volgende artikel Maternal Relationship Instability Influences on Children’s Emotional and Behavioral Functioning in Low-Income Families 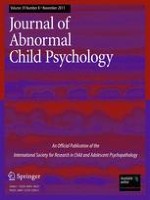 Inhibitory Control and Harsh Discipline as Predictors of Externalizing Problems in Young Children: A Comparative Study of U.S., Chinese, and Japanese Preschoolers

Temperament Variation in Sensitivity to Parenting: Predicting Changes in Depression and Anxiety