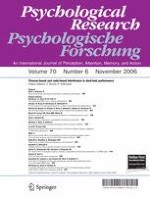 The neural effect of stimulus-response modality compatibility on dual-task performance: an fMRI study

How the brain blinks: towards a neurocognitive model of the attentional blink

On the control of visual spatial attention: evidence from human electrophysiology