publish
Publiceer nu
insite
ZOEKEN
In the writer’s craft section we offer simple tips to improve your writing in one of three areas: Energy, Clarity and Persuasiveness. Each entry focuses on a key writing feature or strategy, illustrates how it commonly goes wrong, teaches the grammatical underpinnings necessary to understand it and offers suggestions to wield it effectively. We encourage readers to share comments on or suggestions for this section on Twitter, using the hashtag: #how’syourwriting?
What’s wrong with the following sentence?

This sentence is long, but there’s no golden rule about sentence length. It’s complex, but it doesn’t commit any grammatical errors. Its main clause is well-formed, with a clear subject (we) and an active main verb (asked). It’s properly punctuated. Then why is it so hard to digest?
Diagnosis: prepositional pile-up. This sentence—my own! [1]—features nine prepositions:

Such chains of prepositional phrases zoom in closer and closer on detail. But because they accumulate before the main clause, they can distract the reader from the central thrust of the sentence.
As Pinker explains, ‘The human mind can only do a few things at a time, and the order in which information comes in affects how that information is handled’ (p. 83) [2]. According to this logic, prepositional pile-up early in a sentence risks overwhelming the reader. It can do so, for instance, by creating a long noun phrase in the subject position (underlined), which directly precedes the main verb. The following is an example:

The attempt to articulate milestones relevant to both specific activities of practice and stages of trainee development is at the centre of our current competency-based assessment activities.

Long noun phrases in the subject position are often followed by a form of the verb to be (is). As discussed in a previous Writer’s Craft section, the verb to be can drain energy from your prose [3]. The following revision addresses both the prepositional pile-up and the weak verb:

The revision reduces the number of prepositional phrases, partly by converting phrases like stages of trainee development to training stages. But it also moves the main subject and verb—Competency-based assessment requires—to earlier in the sentence, so that the reader is anchored by the main action before encountering layers of detail.
Fixing prepositional pile-up is not simply a matter of purging prepositions from your writing. Prepositions are necessary, and we rarely craft a sentence without them. (In this article, only four sentences are preposition-free.) When revising, you need to identify prepositions that can be removed without changing meaning (stage of trainee development → training stage) and ascertain whether preposition placement is taxing the reader’s attention. Sometimes, the best solution to prepositional pile-up is to break the sentence into two. My first example requires this revision technique:

Why do prepositions pile up in academic writing? Perhaps because, in order to meet journal word length requirements, writers try to cram as much detail into as few words as possible. (It’s no accident that my first example comes from a methods section; I was probably trying to detail the nuances of the study sample as efficiently as I could.) Preposition-heavy writing may give writers a false sense that they are using words efficiently, when in fact they are both adding to the word count and creating verbal quicksand for the reader. Now that you know what prepositional pile-up looks like and how it affects readers, you can lighten the prepositional load in your writing.
Open Access This article is distributed under the terms of the Creative Commons Attribution License which permits any use, distribution, and reproduction in any medium, provided the original author(s) and the source are credited.
vorige artikel Medical education in the United States: do residents feel prepared?
volgende artikel Promoting faculty professionalism: a case-based approach
share
DELEN 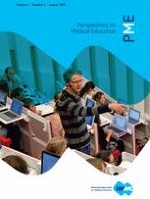 The influence of curricula and role models on medical students’ professional self-identification: a reminder call

Beyond work-hour restrictions: a qualitative study of residents’ subjective workload

Fostering informed empathy through patient-centred education about persons with disabilities