Only case reports have described the co-occurrence of gender identity disorder (GID) and autism spectrum disorders (ASD). This study examined this co-occurrence using a systematic approach. Children and adolescents (115 boys and 89 girls, mean age 10.8, SD = 3.58) referred to a gender identity clinic received a standardized assessment during which a GID diagnosis was made and ASD suspected cases were identified. The Dutch version of the Diagnostic Interview for Social and Communication Disorders (10th rev., DISCO-10) was administered to ascertain ASD classifications. The incidence of ASD in this sample of children and adolescents was 7.8% (n = 16). Clinicians should be aware of co-occurring ASD and GID and the challenges it generates in clinical management.
Gender dysphoria is the distress resulting from an incongruence between assigned and experienced gender. The official DSM-IV-TR diagnosis of gender identity disorder (GID) is characterized by a strong and persistent cross-gender identification as well as a persistent discomfort with one’s biological sex and a sense of inappropriateness in the gender role of that sex (American Psychiatric Association 2000). Estimates of GID in adults range from 1:10,000 to 1:20,000 in men and 1:30,000 to 1:50,000 in women (for a review, see Zucker and Lawrence 2009). Prevalence rates of autism spectrum disorder (ASD) in various recent studies are generally in the range of 60 per 10,000 (for a review, see Fombonne 2005) although some studies report a prevalence above 1% (e.g. Baird et al. 2006). With the reported prevalence rates of ASD and GID, the random co-occurrence of both would be extremely rare. However, gender identity clinics are now reporting an overrepresentation of individuals with ASD in their referrals (Robinow and Knudson 2005). The putative co-occurrence is not only relevant for diagnostic and clinical management reasons, but it also raises important theoretical questions if, indeed, there would be evidence for co-occurrence.
To date, however, studies using systematic measures on this co-occurrence have not been published. The literature on the co-occurrence of ASD and gender dysphoria consists of seven papers describing nine case histories of individuals with ASD and concomitant gender identity problems, mostly children (Gallucci et al. 2005; Kraemer et al. 2005; Landen and Rasmussen 1997; Mukaddes 2002; Perera et al. 2003; Tateno et al. 2008; Williams et al. 1996). Authors show various perspectives in how to understand the co-occurrence of ASD and gender dysphoria. Some of them state that gender dysphoria and autism can be truly co-occurring disorders (Mukaddes 2002; Tateno et al. 2008). Others assume that cross gender behavior results from the inherent predisposition toward unusual interests characteristic of ASD (Williams et al. 1996). It is also suggested that gender dysphoria in individuals with ASD may be considered an obsessive compulsive disorder, separate from both ASD and GID (Landen and Rasmussen 1997; Perera et al. 2003).
In sum, the co-occurrence of gender dysphoria and ASD is of current clinical interest. This study was conducted to establish the incidence of ASD in gender dysphoric children and adolescents, and to describe the specific clinical characteristics of individuals with both gender dysphoria and ASD.

Participants were 231 children and adolescents who had been referred to the Gender Identity Clinic of the VU University Medical Centre in Amsterdam between April 2004 and October 2007. This is the only clinic in the Netherlands with a multidisciplinary team examining gender dysphoric children and adolescents. Nineteen children and eight adolescents were excluded from the study because they were not able to complete the assessment procedure. Reasons were cessation of the gender identity problems at the time of assessment (in some cases due to the waiting list), or serious other psychopathology making a referral to a local mental health clinics necessary and completing the assessment not possible. This resulted in a study group consisting of 108 children (mean age 8.06, SD = 1.82) and 96 adolescents (mean age 13.92, SD = 2.29) consecutively assessed of whom 11 ASD suspected children and 15 ASD suspected adolescents were identified.

All 204 individuals received a standardized clinical assessment, according to the Standards of Care of the World Professional Association for Transgender Health (Meyer et al. 2001). A separate protocol is followed for children under the age of 12 and adolescents between age 12 and 18, respectively. It includes psycho-diagnostic interviews with the child or the adolescent, interviews with the parents about topical functioning as well as the developmental history of the child or adolescent, psychological testing by a trained psychometrist and collection of school information (for a detailed description of the clinical procedure and used instruments, see Cohen-Kettenis 2006).
Persistence of the gender dysphoria of the children and adolescents with ASD was evaluated in 2008 or 2009, which was at least 1 year and in some cases 4 years after the initial assessment. The clinical files were evaluated for those individuals who still attended the gender identity clinic. If no recent information was available, the parents were called.
The study was approved by the Ethical committee of the VU University Medical Centre. Informed consent was obtained from the parents as well as the adolescents age 12 and older.

ASD suspected children and adolescents were identified by discussing potential characteristics of ASD of all new referrals in weekly team meetings. Further diagnostic assessment for ASD was considered when either earlier reports suggested an ASD or the examining psychologist or psychiatrist (first author AV) suspected an ASD. Parents or caregivers of ASD suspected individuals were then invited for a diagnostic ASD interview. ASD diagnoses were confirmed using the Dutch version of the Diagnostic Interview for Social and Communication Disorders-10th revision (DISCO-10 Wing 1999; Dutch version Van Berckelaer-Onnes et al. 2003). The DISCO-10 was chosen for its particular effectiveness for diagnosing disorders within the broader autism spectrum. The DISCO is a semi-structured 2–4 h interview. Its algorithms enable to investigate whether the necessary criteria of different diagnostic systems for ASD are met. During the interview, answers to over 300 questions are coded for computer entry. Inter-rater reliability for the items in the DISCO interview were high, with a kappa coefficient or intra-class correlation at .75 or higher achieved for over 80% of the interview items (Wing et al. 2002). The DISCO-10 was administered by two of the authors (IvBO or IN), who were formally trained in the use of the DISCO-10. The diagnostic algorithms that were used in the current study reflect DSM-IV-TR and ICD-10 criteria for Pervasive Developmental Disorders (American Psychiatric Association 2000; World Health Organization 1993). From the DISCO-10, one obtains an ‘ever’ diagnosis, which is retrospective, as well as a ‘current’ diagnosis, with ‘ever’ including ‘current’. In the current paper, only ‘ever’ diagnoses are reported.

Based on the DSM-IV-TR criteria, children and adolescents were classified as GID, the subthreshold GID not otherwise specified (GID-NOS) or no GID (APA 2000). Additionally, the list of Dimensional Diagnostic Criteria of the GID (DDC-GID) was used. This list was constructed by one of the authors (PCK) and describes DSM-IV-TR sub-criteria of the GID A and B criterions (cross-gender identification and discomfort with his or her sex, respectively). Each sub-criterion can be rated dimensionally with regard to strength, persistence, and duration. Whether criterion A and B are fulfilled remains a clinical decision. Criterion C is an exclusion criterion (no intersex condition). Criterion D (the behavior should reveal clinically significant distress or impairment) may range from no distress, mild distress to strong distress (or unclear) in social, occupational, family or other areas of functioning. GID diagnostic criteria of the individuals who had received a DISCO interview were specified (e.g. sexual orientation, history of childhood GID) by making use of the DDC-GID. Clinical consensus was met for each case by the first author (AV) and one of the other members of the gender identity clinic team for children and adolescents.

Incidence of ASD in the referred children and adolescents was calculated by the percentage of DISCO-confirmed ASD diagnoses in the total number of referrals of children and adolescents separately as well as in the combined sample. Fisher exact tests were used to analyze differences in incidence of individuals with ASD in individuals with GID compared to individuals with GID-NOS.
Independent t-tests were used to ascertain differences in age and IQ between all referred children and adolescents with and without an ASD.
Specific clinical characteristics and follow-up reports of the gender dysphoria were collected from the clinical files and described with regard to GID classification, ASD classification, age of onset of GID, the persistence of a GID diagnosis at follow-up, and, for the adolescents, sexual orientation.

This research was supported by a personal grant for the first author from the Netherlands organization for health research and development (ZonMw). The authors thank the study families for participating in this study. Results of this study were presented on the 8th International Meeting for Autism Research being held in Chicago, May 7–9, 2009. The authors report no conflict of interest. 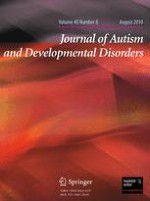 Shana Nichols, Gina Marie Moravcik, Samara Pulver Tetenbaum: Girls Growing up on the Autism Spectrum: What Parents and Professionals Should Know About the Pre-teen and Teenage Years