The Faroe Islands are considered to be a genetic isolate. This population study of the prevalence of autism sought to identify a representative cohort for future genetic studies. In 2002 all schools were screened for autism spectrum disorders. The target population were all children born in 1985 through 1994 and living in the Faroe Islands on December 31, 2002. Children who screened positive for autism characteristics were examined using the Diagnostic Interview for Social and Communication Disorders (DISCO). Of the children aged 8 through 17 years, 0.56% had childhood autism, Asperger syndrome or atypical autism. The male:female ratio was just under 6:1. The prevalence of autism in the Faroe Islands was very similar to that reported from many western countries.
vorige artikel Differentiating between Autism Spectrum Disorders and Other Developmental Disabilities in Children Who Failed a Screening Instrument for ASD
volgende artikel Deficits in Free Recall Persist in Asperger’s Syndrome Despite Training in the Use of List-appropriate Learning Strategies 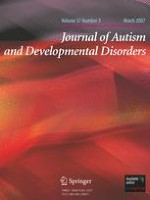