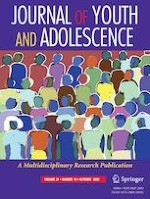 Self-harm and Aggression in Chinese Early Adolescents: Their Co-occurrence and the Role of Bullying Victimization

Too Many Males or Too Many Females? Classroom Sex Ratio, Life History Strategies and Risk-Taking Behaviors

Within-person Changes in Co-rumination and Rumination in Adolescence: Examining Heterogeneity and the Moderating Roles of Gender and Time

Helping Others in Virtual Reality Increases Prosocial Self-understanding Among Adolescents