Previous research has suggested that highly hypnotisable participants (‘highs’) are more sensitive to the bistability of ambiguous figures—as evidenced by reporting more perspective changes of a Necker cube—than low hypnotisable participants (‘lows’). This finding has been interpreted as supporting the hypothesis that highs have more efficient sustained attentional abilities than lows. However, the higher report of perspective changes in highs in comparison to lows may reflect the implementation of different expectation-based strategies as a result of differently constructed demand characteristics according to one’s level of hypnotisability. Highs, but not lows, might interpret an instruction to report perspective changes as an instruction to report many changes. Using a Necker cube as our bistable stimulus, we manipulated demand characteristics by giving specific information to participants of different hypnotisability levels. Participants were told that previous research has shown that people with similar hypnotisability as theirs were either very good at switching or maintaining perspective versus no information. Our results show that highs, but neither lows nor mediums, were strongly influenced by the given information. However, highs were not better at maintaining the same perspective than participants with lower hypnotisability. Taken together, these findings favour the view that the higher sensitivity of highs in comparison to lows to the bistability of ambiguous figures reflect the implementation of different strategies. 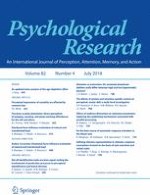 The effects of anxiety and situation-specific context on perceptual–motor skill: a multi-level investigation

Perceptual impressions of causality are affected by common fate