The diminished ability to maintain verbal information in short-term memory—forgetfulness—mitigates the ability to follow instructions and acquisition of knowledge. Despite its acknowledged importance and involvement in multiple DSM-5 ADHD clinical symptoms, the construct remains under scrutinized in children with the disorder. The present study examined the extent to which children with ADHD (n = 15) were able to maintain multiple length word lists (2, 4, and 6 words) in phonological short-term memory (STM) for prolonged time intervals (12-s and 21-s) relative to typically developing (TD) children (n = 18). More crucially, it is the first to utilize a conventional suppression paradigm to determine whether deficient rehearsal contributes to diminished word recall by children with ADHD over time. Children with ADHD exhibited clear evidence of forgetting when tasked with remembering a greater number of words and maintaining the words over longer time intervals relative to TD children. Follow-up analyses, however, revealed that the imposition of articulatory suppression (repeating an irrelevant syllable throughout recall intervals) diminished the recall performance of children in both groups to a similar degree relative to their performance under the recall only (non-suppression) conditions. Collectively, findings indicate that inadequate use of overt/covert rehearsal to refresh/maintain verbal memoranda in phonological STM is an unlikely explanation for the higher rates of forgetting in children with ADHD. Consideration of other sources that may contribute to higher rates of forgetfulness in ADHD, such as reduced attention control and/or higher susceptibility to internal interference, warrant attention in future investigations.
vorige artikel Does Child Anxiety Exacerbate or Protect Against Parent–Child Relationship Difficulties in Children with Elevated ADHD Symptoms?
volgende artikel Intra- and interpersonal emotion regulation strategies and Schizotypic personality characteristics 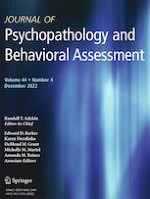 Does Child Anxiety Exacerbate or Protect Against Parent–Child Relationship Difficulties in Children with Elevated ADHD Symptoms?

Difficulties in interpersonal regulation of emotions (DIRE) questionnaire: Psychometric Properties of the Italian Version and Associations with psychopathological symptoms