Testing feasibility and efficacy of psychological treatment via mobile devices is important, given its potential benefits for high-dosage treatment delivery, widespread and inexpensive dissemination, and efficient research methods. We conducted the first randomized controlled trial of attention bias modification training delivered via smartphones, comparing this training to control training in a double-blind design, also including a waitlist condition. All participants performed a variant of dot-probe training involving faces with neutral and disgust (representative of social threat) expressions in brief sessions three times daily over 4 weeks on their own smartphones, at home or anywhere they chose. Attention bias modification, also known as cognitive bias modification of attention, training included a contingency to induce attentional deployment away from disgust faces, whereas the control training included no contingency. Participants completed weekly Internet-based self-report symptom assessments as well as smartphone-delivered dot-probe attention bias assessments, whose reliability findings supported the viability of using smartphones for reaction-time based assessments. The between-groups training effect on attention bias scores was small, showing statistical significance in some analyses and not in others. On measures of social anxiety, intention-to-treat analyses (n = 326) revealed significant pre–post treatment declines with medium to large effect sizes in both training groups, whereas small declines in a waitlist group were nonsignificant. Both training groups showed greater reductions in social anxiety than did waitlist; however, the benefits under these two training conditions were statistically indistinguishable. Improvements in the two training conditions beyond those of waitlist could be attributable to any factors common to them, but not to the contingency training specific to active attention bias modification training. 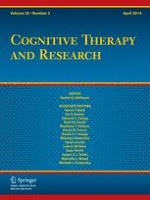 Travellers’ Tales in Cognitive Bias Modification Research: A Commentary on the Special Issue

When Ignorance is Bliss: Explicit Instruction and the Efficacy of CBM-A for Anxiety

The Effects of Approach–Avoidance Modification on Social Anxiety Disorder: A Pilot Study