Obesity-related behaviors, such as intake of snacks and sweetened beverages (SSB), are assumed to result from the interplay between environmental factors and adolescents’ ability to self-regulate their eating behaviors. The empirical evidence supporting this assumption is missing. This study investigated the relationships between perceptions of at-home and out-of-home food environment (including SSB accessibility, parental, and peers’ social pressure to reduce intake of SSB), nutrition self-regulatory strategies (controlling temptations and suppression), and SSB intake. In particular, we hypothesized that these associations would differ across the stages of preadolescence, early and mid-adolescence. Self-reported data were collected from 2,764 adolescents (10–17 years old; 49 % girls) from 24 schools in the Netherlands, Poland, Portugal, and the United Kingdom. Path analysis indicated that direct associations between peers’ social influence and SSB intake increased with age. Direct negative associations between at-home and out-of-home accessibility and SSB intake as well as direct positive associations between parental pressure and intake become significantly weaker with age. Accessibility was related negatively to self-regulation, whereas higher social pressure was associated with higher self-regulation. The effects of the environmental factors were mediated by self-regulation. Quantitative and qualitative differences in self-regulation were observed across the stages of adolescence. The associations between the use of self-regulatory strategies and lower SSB intake become significantly stronger with age. In preadolescence, SSB intake was regulated by means of strategies that aimed at direct actions toward tempting food. In contrast, early and mid-adolescents controlled their SSB intake by means of a combination of self-regulatory strategies focusing on direct actions toward tempting food and strategies focusing on changing the psychological meaning of tempting food. 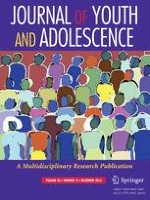 Adolescents’ Empathy and Prosocial Behavior in the Family Context: A Longitudinal Study