This study examined the association between cigarette smoking and dieting behaviors and trends in that association among US adolescents in grades 9–12 between 1999 and 2007. Youth Risk Behavior Survey datasets were analyzed using the multivariable logistic regression method. The sample size of each survey year ranged from 13,554 to 15,273 with girls representing 49–51% of the sample (N = 71,854). About 62% of the entire study participants were whites and 14% were blacks. Prevalence estimates of current smoking and corresponding 95% confidence intervals were computed across four comparison groups formed by gender and body weight. Extreme dieting was an independent predictor of smoking. Extreme dieters showed a higher variability of smoking behavior than their peers. The magnitude of the association between smoking and extreme dieting became smaller in recent years among adolescents but remained unchanged among non-overweight girls over that same time period. When adolescent smoking behavior is examined, the intensity of dieting behavior should be considered within its association with other co-occurring unhealthy behaviors.
vorige artikel An Ecological System Approach to Adolescent Smoking Behavior
volgende artikel School Smoking Policy Characteristics and Individual Perceptions of the School Tobacco Context: Are They Linked to Students’ Smoking Status? 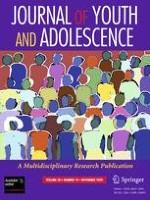 Linkages Over Time Between Adolescents' Relationships with Parents and Friends

The Quality of Mentoring Relationships and Mentoring Success

Emotional and Behavioral Effects of Romantic Relationships in Chinese Adolescents

The Developmental Significance of Adolescent Romantic Relationships: Parent and Peer Predictors of Engagement and Quality at Age 15