The associations of mindfulness with PTSD and depressive symptoms were greater in magnitude than the associations for combat experiences, and mindfulness explained a large and significant proportion of the variance in outcomes. Additional longitudinal research investigating how mindfulness skills and strategies may buffer against risk for PTSD and depression posed by combat experience is warranted in this high risk population. 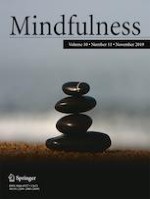 How to Sit in Sitting Meditation

Why Are Researchers Not Interested in Studying Individual Mindfulness-Based Interventions?

The Role of Mindfulness in the Cultivation of Absorption

Correction to: The Effect of Brief Mindfulness Training on Brain Reactivity to Food Cues During Nicotine Withdrawal: A Pilot Functional Imaging Study