Based upon checklist data from the Autism Speaks Autism Treatment Network, we hypothesized that functional constipation (FC) would be associated with rigid-compulsive behavior in children with autism spectrum disorder (ASD). We used the Questionnaire on Pediatric Gastrointestinal Symptoms—Rome III to assess FC symptoms in 108 children with ASD. As hypothesized, FC was associated with parent ratings on the Repetitive Behavior Scales—Revised (RBS-R) Compulsive, Ritualistic, and Sameness subscales in the overall population. Of note, FC was less common in children who were not taking medications that target behavior or treat FC. In the medication-free children, rigid-compulsive behavior was not significantly associated with FC. More research is needed to understand the mechanisms underlying these associations.
vorige artikel Expressive Incoherence and Alexithymia in Autism Spectrum Disorder
volgende artikel Characterizing Sleep in Adolescents and Adults with Autism Spectrum Disorders 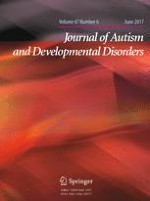 Erratum to: Editorial: 2016 in Review