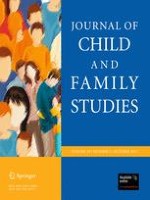 Facing the Beast Apart Together: Fear in Boys and Girls after Processing Information about Novel Animals Individually or in a Duo

Predicting Parenting Stress in Families of Children with ADHD: Parent and Contextual Factors