Adolescent obesity is a well-known worldwide issue with growing prevalence and complications. The concept of body image and complications of its misperception has been noted more recently. Life satisfaction (LS) and self-rated health (SRH) have also been known as independent morbidity and mortality factors. The objective of this study was to evaluate the associations of perceived weight status (body image) and actual body mass index (BMI), with LS and SRH in a nationally representative sample of a pediatric population in Iran, as a country located in the Middle East and North Africa region.

This nationwide population-based survey was conducted among 5,570 (2,784 female and 2,786 male) Iranian students, aged 10–18 years, living in urban and rural areas of 27 provinces, which were selected via multistage sampling method. Agreement between BMI and perceived weight status (underweight, about right and overweight/obesity) was assessed. Adjusted association between BMI and perceived weight status with LS and SRH was assessed using multiple logistic regressions after adjustment for potential confounders.

A mismatch between BMI and body weight perception was found in this study. Moreover, LS and SRH were not related with BMI, but had negative association with body weight perception.
vorige artikel Influence of specific individual and environmental variables on the relationship between body mass index and health-related quality of life in overweight and obese adolescents 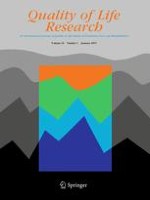 Quality of life in indigenous and non-indigenous older adults: assessing the CASP-12 factor structure and identifying a brief CASP-3