Assessment of the psychometric properties of the Chinese Impact of Vision Impairment questionnaire in a population-based study: findings from the Singapore Chinese Eye Study | mijn-bsl Skip to main content
ZOEKEN MENU 1 2 3 4

We investigated whether the Chinese impact of vision impairment (IVI) questionnaire is valid to generate reliable person estimates in a population-based sample.

VRQoL was measured using the 32-item Chinese version of the IVI questionnaire in the Singapore Chinese Eye Study (2009–2011), a population-based study of the prevalence and risk factors for VI and eye diseases in Chinese Singaporeans. Rasch analysis was used to assess the Chinese IVI’s response category functioning, precision, unidimensionality, targeting and differential item functioning. The ability of the Chinese IVI to discriminate participants along the spectrum of VI demonstrated criterion validity.

A three-dimensional 29-item Chinese IVI is a valid tool to assess the impact of VI on VRQoL in a large population-based sample, comprising over a quarter of participants with VI. The 28-item English IVI is also likely to be valid for use in population-based studies; however, this must be demonstrated empirically in future studies.
vorige artikel Development and validation of a questionnaire assessing the perceived control in health care among older adults with care needs in the Netherlands
volgende artikel Psychometric analysis of the Korean version of the high-dose chemotherapy specific quality of life questionnaire module from the European Organization for Research and Treatment of Cancer (EORTC QLQ-HDC29) 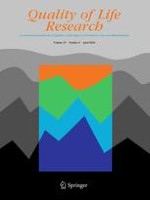 Erratum to: Distilling the essence of appraisal: a mixed methods study of people with multiple sclerosis

Distilling the essence of appraisal: a mixed methods study of people with multiple sclerosis

The application of a network approach to Health-Related Quality of Life (HRQoL): introducing a new method for assessing HRQoL in healthy adults and cancer patients