Assessment of the construct validity and responsiveness of preference-based quality of life measures in people with Parkinson’s: a systematic review | mijn-bsl Skip to main content
ZOEKEN MENU 1 2 3 4

Generic preference-based quality of life (PbQoL) measures are sometimes criticized for being insensitive or failing to capture important aspects of quality of life (QoL) in specific populations. The objective of this study was to systematically review and assess the construct validity and responsiveness of PbQoL measures in Parkinson’s.

Ten databases were systematically searched up to July 2015. Studies were included if a PbQoL instrument along with a common Parkinson’s clinical or QoL measure was used, and the utility values were reported. The PbQoL instruments were assessed for construct validity (discriminant and convergent validity) and responsiveness.

Twenty-three of 2758 studies were included, of which the majority evidence was for EQ-5D. Overall good evidence of discriminant validity was demonstrated in the Health Utility Index (HUI)-3, EQ-5D-5L, EQ-5D-3L, 15D, HUI-2, and Disability and Distress Index (DDI). Nevertheless, HUI-2 and EQ-5D-3L were shown to be less sensitive among patients with mild Parkinson’s. Moderate to strong correlations were shown between the PbQoL measures (EQ-5D-3L, EQ-5D-5L, 15D, DDI, and HUI-II) and Parkinson’s-specific measures. Twelve studies provided evidence for the assessment of responsiveness of EQ-5D-3L and one study for 15D, among which six studies reached inconsistent results between EQ-5D-3L and the Parkinson’s-specific measures in measuring the change overtime.

The construct validity of the PbQoL measures was generally good, but there are concerns regarding their responsiveness to change. In Parkinson’s, the inclusion of a Parkinson’s-specific QoL measure or a generic but broader scoped mental and well-being focused measure to incorporate aspects not included in the common PbQoL measures is recommended.
volgende artikel Age- and gender-specific associations between insomnia and falls in Boston Puerto Rican adults

Titel
Assessment of the construct validity and responsiveness of preference-based quality of life measures in people with Parkinson’s: a systematic review
Auteurs
Yiqiao Xin
Emma McIntosh 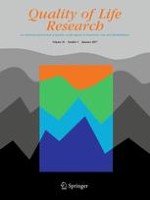 Development of a French version of the Endometriosis Health Profile 5 (EHP-5): cross-cultural adaptation and psychometric evaluation

Reliability, validity and responsiveness of the Greek MacDQoL individualized measure of the impact of macular degeneration on quality of life

Sustained quality of life improvement after intracoronary injection of autologous bone marrow cells in the setting of acute myocardial infarction: results from the BONAMI trial