There has been an increasing interest in possible connections between autism spectrum disorder (ASD) and schizophrenia in the last decade. Neuropsychological comparison studies have, however, been few. The present study examined similarities and differences in intellectual and executive functioning between adults with Asperger syndrome (AS) and adults with schizophrenic psychosis (SP). A group with AS and a group with SP were assessed neuropsychologically with WAIS-III and D-KEFS. Similarities were found between groups, as displayed by an uneven cognitive profile, limitations in working memory, processing speed and some aspects of executive functioning. Full Scale IQ was higher in the AS group. These results add to the current research illuminating similarities and differences between ASD and schizophrenia on a cognitive level. 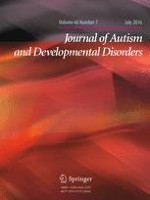 The Relationship Between Clinicians’ Confidence and Accuracy, and the Influence of Child Characteristics, in the Screening of Autism Spectrum Disorder

Brief Report: The Feasibility and Effectiveness of an Advocacy Program for Latino Families of Children with Autism Spectrum Disorder

Comparison of Obesity, Physical Activity, and Sedentary Behaviors Between Adolescents With Autism Spectrum Disorders and Without

Lessons that Linger: A 40-Year Follow-Along Note About a Boy with Autism Taught to Communicate by Gestures when Aged Six