The higher prevalence of autism spectrum disorder (ASD) in males, relative to that seen in females, is a well-replicated phenomenon. A growing body of research has suggested that there may be gender differences in core ASD deficits and patterns of psychiatric comorbidity among adolescents and adults with ASD. The present study sought to determine if association between psychiatric diagnoses and ASD traits differed by gender in a young adult analogue sample. Participants (n = 84) were university students, scoring either above or below a pre-determined cut-off of ASD traits. Using a structured psychiatric screening interview, ASD traits were found to more strongly predict exceeding screening threshold for mood disorders in females than in males. Future directions and clinical implications are discussed. 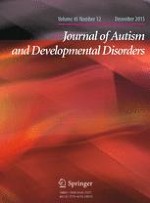 Brief Report: Development of a Robotic Intervention Platform for Young Children with ASD

“On the Sidelines”: Access to Autism-Related Services in the West Bank

Prevalence of Autism Spectrum Disorders in Ecuador: A Pilot Study in Quito