ASD in Females: Are We Overstating the Gender Difference in Diagnosis? | mijn-bsl Skip to main content
ZOEKEN MENU 1 2 3 4

Autism spectrum disorder (ASD) is predominantly diagnosed in males. In explaining the differential rate of occurrence in males and females, biogenetic models have been proposed and studied, often to the exclusion of potential social or cultural factors that may influence different rates of diagnosis across the genders. In this theoretical paper, we consider sociocultural influences that may contribute to the differential expression of ASD in females and partially explain potential underidentification of ASD in females. Based on our synthesis of the extant literature, we propose that ASD may be underidentified in affected females without co-occurring intellectual impairment, owing to a pattern of subtle yet potentially meaningful gender differences in symptom manifestation (e.g., less unusual stereotyped and repetitive behaviors in females, increased prevalence of internalizing problems in females) and gender inequities in research on the ASD phenotype that potentially contributes to biases in assessment tools and diagnostic practices. We offer recommendations for future research directions on gender differences in ASD, and we suggest implications to inform best practice and policy for the assessment of females with ASD.
vorige artikel Skill Acquisition and Utilization During Evidence-Based Psychosocial Treatments for Childhood Disruptive Behavior Problems: A Review and Meta-analysis
volgende artikel Little Children with Big Worries: Addressing the Needs of Young, Anxious Children and the Problem of Parent Engagement 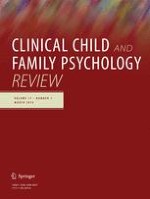 Small or Big in the Eyes of the Other: On the Developmental Psychopathology of Self-Conscious Emotions as Shame, Guilt, and Pride

Little Children with Big Worries: Addressing the Needs of Young, Anxious Children and the Problem of Parent Engagement