Copy-number variants (CNVs) are associated with susceptibility to autism spectrum disorder (ASD). To detect the presence of CNVs, we conducted an array-comparative genomic hybridization (array-CGH) analysis in 133 children with “essential” ASD phenotype. Genetic analyses documented that 12 children had causative CNVs (C-CNVs), 29 children had non-causative CNVs (NC-CNVs) and 92 children without CNVs (W-CNVs). Results on clinical evaluation showed no differences in cognitive abilities among the three groups, and a higher number of ASD symptoms and of non-verbal children in the C-CNVs group compared to the W-CNVs and NC-CNVs groups. Our results highlighted the importance of the array-CGH analyses and showed that the presence of specific CNVs may differentiate clinical outputs in children with ASD.
vorige artikel Contribution of Theory of Mind, Executive Functioning, and Pragmatics to Socialization Behaviors of Children with High-Functioning Autism
volgende artikel Validating a Culturally-sensitive Social Competence Training Programme for Adolescents with ASD in a Chinese Context: An Initial Investigation 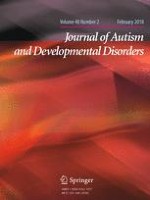