Overview of the design

This longitudinal, survey study was carried out in the general population. The status of insomnia was assessed both at baseline [Time 1 (T1)] and at the 1-year follow-up [Time 2 (T2)], while questions pertaining to sleep hygiene practices were administered only at T1. The study participants were those who returned the baseline and follow-up postal questionnaire as well as did not report other primary sleep disorders than insomnia. The Örebro Hospital’s Board on Research Ethics approved this study. Informed consent was obtained in a written format.

This study is a population-based investigation from a random sample of 3000 residents, 20–60 years old, from 3 out of 25 counties in Sweden (see also Jansson-Fröjmark & Linton, 2008). The three counties are representative of all Swedish counties in terms of socio-economic status, gender, age, and living areas. From public records of the three counties, in which all residents are listed, the sample was obtained via random sampling. The age range (20–60 year) was chosen as to provide a sample of the workforce in the general population.
Of the 3000 residents, 2076 participants (69%) returned the baseline questionnaire. To assess whether the baseline non-responders differed from the responders, an attrition analysis in two steps (register data and telephone interview) was performed (for details see Jansson-Fröjmark & Linton, 2008). The attrition analysis showed that the baseline non-responders and responders were similar in terms of age and gender. Also, the analysis demonstrated that there were significantly more responders (35%), compared to the non-responders (29%), who reported a sleep problem during the past 3 months at baseline.
In all, 1746 (84%) of the 2076 baseline responders also returned the follow-up questionnaire 1 year later. For the purpose of the current paper, all participants who reported other primary sleep disorders than insomnia at baseline ( n = 108, 6.2%) were excluded (see Primary sleep disorders below). This pertained to the following primary sleep disorders: apnea ( n = 33), circadian rhythm disorder ( n = 2), restless legs syndrome ( n = 54), and periodic limb movement disorder ( n = 19). The current paper focuses on the 1638 remaining participants, and descriptive statistics for the study participants are depicted in Table  1. To estimate whether there were significant differences in terms of insomnia prevalence and sleep hygiene behaviors at baseline between the 330 individuals who returned the baseline but not the follow-up questionnaire and the 1638 study participants who responded to both questionnaires, a Chi square analysis and t-tests were conducted. The results showed that there were no significant differences at baseline regarding reported insomnia prevalence (χ 2 = 1.17, p = .322) nor on the sleep hygiene items ( p ≥ .400) between the two groups.
Table 1
The 1638 study participants: demographic parameters
Means are presented with standard deviations in parenthesis

The questionnaire used in this study was based on existing and validated surveys, and was constructed to assess a variety of factors, including demographic variables (T1), sleep hygiene practices (T1), sleep (T1 and T2), daytime symptoms (T1 and T2), and daytime functioning (T1 and T2). The following demographic parameters were assessed: age, gender, civil status (married or cohabitant—living alone), and occupational status (employed—student—not employed—sick leave or pension). The baseline questionnaire was sent to the 3,000 residents, along with a letter of introduction, information about the project and a stamped return-envelope. The follow-up questionnaire was then mailed 1 year later to the 2076 individuals who returned the baseline questionnaire. At both baseline and follow-up, if a response was not received within 2 weeks a reminder was mailed. If an additional 2 weeks elapsed without a response a second reminder was sent.

To screen out possible cases of other primary sleep disorders than insomnia, the questionnaire at T1 contained items based on the DSM-IV symptom criteria. These items were only administered to participants who reported problems sleeping during the past 3 months. An affirmative response on the following items was used to screen out other primary sleep disorders than insomnia: “noticed by someone else often or very often: breathing pauses or snoring during your sleep” (apnea), “often or very often: an unusual or undesirable sleep schedule or different from most other people” (circadian rhythm disorder), “often or very often in the evening or at night: strong urge to move your legs accompanied with an unpleasant sensation in your legs” (restless legs syndrome), and “noticed by someone else: your legs jerk or twitch repeatedly during your sleep” (periodic limb movement disorder).

Two demographic parameters (age and gender) were collected at T1 and used as covariates in the statistical analyses based on previous research showing that both age and gender might be related to insomnia (Ohayon, 2002). Since mental ill-health and pain might also have an impact on insomnia (e.g., LeBlanc et al., 2009; Ohayon, 2002), those two domains were also employed as covariates. To assess mental ill-health and pain at T1, two of the subscales from the Duke Health Profile (DHP) were used (Parkerson et al., 1990). The subscale ‘mental ill-health’ consists of five items (i.e., ‘I like who I am, ‘I give up too easily’, ‘I have difficulty concentrating’, ‘During the past week—How much trouble have you had with: Feeling depressed or sad’, and ‘During the past week—How much trouble have you had with: Nervousness’). All the five items were recoded so that a high score indicates poor mental health. The subscale ‘pain’ contains only one item (i.e., ‘During the past week—How much trouble have you had with: Hurting or aching in any part of your body’). A high score on the pain subscale indicates more trouble with pain. For both DHP subscales, the scores can range from 0 (very good mental health/no trouble with pain) to 100 (very poor mental health/extreme trouble with pain).

The data was first summarized with descriptive statistics. An analysis of outliers was conducted employing various forms of detection (e.g. univariate and multivariate) and outlier profiling, but no outliers were identified. Binary logistic regressions were used for the main analyses. The thirteen independent variables were the following: age, gender, mental ill-health, pain, and the nine sleep hygiene items. All the continuous independent variables were transformed into z-scores to enable comparisons between odds ratios and confidence intervals. The logistic regression analyses were based on a hierarchical, multivariate approach, i.e., including age, gender, mental health, and pain in step 1 and all sleep hygiene items in step 2. Since some cells in the analyses contained a limited number of participants, univariate analysis was used as a first, preparatory step in which each independent variable was individually analyzed in relation to the dependent variables insomnia at T1, insomnia at T2, persistence of insomnia and remission from insomnia. Beta values and standard errors are presented in the tables, and odds ratios are presented with 95% confidence intervals. Nagelkerke R 2 is reported for the logistic regressions. A two-tailed p value smaller than .05 was considered statistically significant.

As can be seen in Table  2, 8.1% of the participants met criteria for insomnia at T1 while 91.9% did not. In a preparatory step, the significant independent variables in univariate analyses were: age ( p = .028), gender ( p = .006), mental ill-health ( p < .001), pain ( p < .001), irregular sleep schedule ( p < .001), nicotine use ( p < .001), caffeinated drinks ( p = .037), and light or noise ( p = .001). As is displayed in Table  2, a hierarchical, multivariate logistic regression analysis demonstrated that reporting a higher level of mental ill-health, pain, and nicotine consumption late in the evening increased the risk of reporting insomnia at T1. The model was significant and explained 27% of the variance in insomnia status.
Table 2
Sleep hygiene practices at baseline and insomnia at baseline: descriptive statistics and multivariate logistic regression analysis
The full model was significant ( p < .001) and predicted 93.0% of cases (99.4% correct for those without insomnia and 14.8% for those with insomnia)
I insomnia, NI not insomnia, T1 Time 1
*** p < .001

Of those who did not fulfill criteria for insomnia at T1, 2.4% met criteria for incident insomnia at T2 (Table  3). In a preparatory step, the significant independent variables in univariate analyses were: mental ill-health ( p < .001), pain ( p = .010), and nicotine use ( p = .047). As is displayed in Table  3, a hierarchical, multivariate logistic regression analysis demonstrated that reporting a higher level of mental ill-health increased the risk of incident insomnia at T2. The model was significant and explained 11% of the variance in incident insomnia status.
Table 3
Sleep hygiene practices at baseline and the incidence of insomnia: descriptive statistics and multivariate logistic regression analysis
The full model was significant ( p < .001) and predicted 97.5% of cases (100% correct for those without insomnia and 0% for those with insomnia)
I insomnia, NI not insomnia, T1 Time 1, T2 Time 2
*** p < .001

Sleep hygiene practices at baseline and persistence of insomnia

As can be seen in Table  4, 3.5% of the sample met criteria for insomnia at both T1 and T2 (i.e., persistent insomnia), whereas 89.7% did not fulfill criteria for insomnia at any of the two assessment points. In a preparatory step, the significant independent variables in univariate analyses were: age ( p = .008), mental ill-health ( p < .001), pain ( p < .001), nicotine use ( p < .001), and light or noise ( p = .013). A hierarchical, multivariate logistic regression analysis (Table  4) showed that reporting a higher level of mental ill-health, pain, nicotine consumption late in the evening, and light or noise disturbance increased the risk of persistent insomnia from T1 to T2. The model was significant and explained 32% of the variance in persistent insomnia status.
Table 4
Sleep hygiene practices at baseline and the persistence of insomnia: descriptive statistics and multivariate logistic regression analysis
The full model was significant ( p < .001) and predicted 97.1% of cases (99.8% correct for those without insomnia and 14.0% for those with insomnia)
I insomnia, NI not insomnia, T1 Time 1, T2 Time 2
* p < .05, *** p < .001

Sleep hygiene practices at baseline and the persistence/remission of insomnia

In Table  5, descriptive statistics and a logistic regression analysis for the risk of persistence and remission of insomnia is presented. Of those who did fulfill criteria for insomnia at T1, 43.2% met criteria for persistent insomnia and 56.8% fulfilled criteria for remission from insomnia at T2 (Table  5). In a preparatory step, the two significant independent variables in univariate analyses were pain ( p = .008) and irregular sleep schedule ( p = .037). In the final model (Table  5), it was displayed that reporting an irregular sleep schedule at T1 was associated with an increased risk for persistent insomnia from T1 to T2 compared to remission from insomnia. The full model was significant and explained 17% of the variance in persistent insomnia status.
Table 5
Sleep hygiene practices at baseline and the remission of insomnia: descriptive statistics and multivariate logistic regression analysis
The full model was significant ( p = .011) and predicted 61.9% of cases (77.4% correct for those with remission and 39.5% for those with insomnia)
I insomnia, NI not insomnia, T1 Time 1, T2 Time 2
* p < .05

This work was supported by AFA Sweden.

Markus Jansson-Fröjmark, Jonas Evander and Sven Alfonsson declares that they have no conflict of interests to report.

All procedures were in accordance with the ethical standards of the institutional research committees and with the 1964 Helsinki declaration and its later amendments or comparable ethical standards. Informed consent was obtained from all individual participants included in the study.
Open AccessThis article is distributed under the terms of the Creative Commons Attribution 4.0 International License ( http://​creativecommons.​org/​licenses/​by/​4.​0/​), which permits unrestricted use, distribution, and reproduction in any medium, provided you give appropriate credit to the original author(s) and the source, provide a link to the Creative Commons license, and indicate if changes were made. 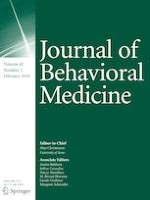 Predictors of engagement in post-discharge quitline counseling among hospitalized smokers

The evolution of professional societies in behavioral medicine

Introduction to the special series—behavioral medicine at 40: origins, achievements, and future directions