The present study examined associations between individual differences in trait negative affect and appraisal biases during a marital conflict discussion in a sample of 300 middle-aged and older couples. We used the interpersonal circumplex (IPC) to quantify specific appraisal biases, defined as discrepancies between participant ratings of their spouses’ levels of hostility, friendliness, and control during a marital disagreement relative to independent behavioral coding of these behavioral dimensions. Further, we examined the specific component affective traits (i.e., anxiety, depression, and anger) individually, as well as their independent effects in simultaneous analyses. Composite negative affectivity was associated with appraisals of the spouse as displaying more control, less friendliness, and more hostility than was evident in independent ratings. For the specific negative affects, depressive tendencies—and perhaps the closely related trait of anxiety—were associated with viewing the spouse as both more hostile and less warm or friendly than did independent observers. In contrast, individuals prone to anger perceived more control in their spouse’s behavior than was rated by observers. The results support interpersonal and cognitive models of the role of appraisals in general negative affectivity and its specific components.
volgende artikel Anger, Aggression, and Irrational Beliefs in Adolescents 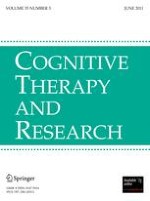 Rumination in Clinical Depression: A Type of Emotional Suppression?

Social Rejection: How Best to Think About It?

Selective Attention and Health Anxiety: Ill-Health Stimuli are Distracting for Everyone