Accurate evaluation of mindfulness-based training requires understanding of the differences between state and trait changes, and the Generalizability Theory (G-Theory) is the most appropriate method to differentiate these aspects in a measure. The Five Facet Mindfulness Questionnaire (FFMQ) is widely used measure of dispositional mindfulness, but its ability to accurately capture stable aspects of mindfulness has not been rigorously investigated using appropriate methodology.

G-Theory was applied to differentiate between trait and state aspects of mindfulness and to examine temporal reliability of the FFMQ in a sample of 83 participants who completed the scale at three occasions separated by 2-week intervals.

The total 39-item FFMQ and its short version FFMQ-18 have demonstrated good reliability in measuring trait mindfulness with G coefficients of 0.89 and 0.75, respectively, while individual facet subscales of the FFMQ appeared less reliable in measuring either trait or state. Subsequent analysis attempted to combine the FFMQ items that were least stable over time into a state mindfulness subscale. However, this did not result in acceptable psychometric properties for such a state subscale.

The findings of this study indicate that reliable measurement of stable aspects of mindfulness can be achieved by using the full FFMQ scale or its short version FFMQ-18 with scores generalizable across sample population and occasions. The scores obtained on individual facet subscales of the FFMQ predominantly measuring trait mindfulness, but their reliability is affected by measurement error due to interaction between person, item, and occasion.
vorige artikel The De-automatizing Function of Mindfulness Facets: an Empirical Test
volgende artikel Increasing Mindfulness Skills of Veterans With PTSD Through Daily Mindfulness Training Incorporated Into an Intensive Treatment Program 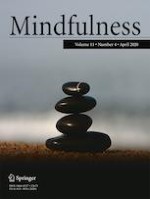 The De-automatizing Function of Mindfulness Facets: an Empirical Test