This study aims at investigating the stressors that increased the risk of somatic symptoms in the general Chinese population.

Chinese participants (n = 202) were recruited in a population-based household survey. Somatic symptoms were measured by the Patient Health Questionnaire-15, while potential stressors that increased the risk of somatic symptoms were measured by the Perceived Stress Scale, Hospital Anxiety and Depression Scale, Insomnia Severity Index and ENRICHD Social Support Instrument.

Physical and psychological symptoms are intertwined. It was recommended that reducing anxiety and improving sleep quality would be helpful to reduce somatic symptoms. These findings help in early identification and treatment of Chinese adults with persisting somatization. 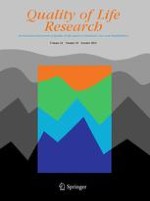 Health-related quality of life among children, young people and adults with esophageal atresia: a review of the literature and recommendations for future research

How to interpret multidimensional quality of life questionnaires for patients with schizophrenia?

QUAlity of Life Assessment in Spina bifida for Adults (QUALAS-A): development and international validation of a novel health-related quality of life instrument