The development of negative cognitive biases, together with symptoms of anxiety and depression, has yet to be investigated longitudinally. Using a three-wave design, the present study examined developmental trajectories of anxiety and depressive symptoms and the co-occurrence of cognitive biases, in a large normative sample of adolescents (N = 504). Data was drawn from the CogBIAS Longitudinal Study (CogBIAS-L-S), which assessed a wide range of psychological variables, including cognitive biases and self-reported anxiety and depressive symptoms, when adolescents were approximately 13, 14.5, and 16 years of age. The results showed that overall levels of anxiety were low and stable, while levels of depression were low but increased slightly at each wave. Growth mixture modeling identified four distinct developmental classes with regard to anxiety and depressive symptoms. Multiple group analysis further showed that class membership was related to the development of cognitive biases. The majority of the sample (75%) was characterised by ‘Low symptoms’ of anxiety and depression and showed low interpretation and memory biases for negative stimuli at each wave. A second class (11%) displayed ‘Decreasing anxiety symptoms’ and showed decreasing interpretation bias, but increasing memory bias. A third class (8%) displayed ‘Comorbid increasing symptoms’ and showed increasing interpretation and memory biases. While the fourth class (6%) displayed ‘Comorbid decreasing symptoms’ and showed decreasing interpretation and memory biases. This longitudinal study sheds light on healthy and psychopathological emotional development in adolescence and highlights cognitive mechanisms that may be useful targets for prevention and early interventions. 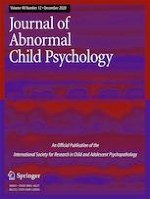 Trajectories of Overprotective Parenting and Hyperactivity-Impulsivity and Inattention Among Moderate-Late Preterm Children: A Population-Based Study