An abundance of evidence indicates that action selection is guided, at least in certain contexts, by anticipation of action outcomes. In one particularly clear demonstration of this principle, Bechara and colleagues, studying a gambling task, observed phasic skin conductance responses just prior to actions associated with a relatively high risk of monetary loss (Bechara et al. in J Neurosci 19:5473–5481, 1999; Bechara et al. in Science 275:1293–1295, 1997; Bechara et al. in Cereb Cortex 6:215–225, 1996). In the present work, we tested for the same effect in a paradigm where choices resulted not in differential monetary outcomes, but in differential requirements for subsequent mental effort. In two experiments, we observed an anticipatory skin conductance response prior to actions resulting in a high level of cognitive demand. This finding indicates that requirements for effortful cognitive control are anticipated during action selection. We argue, based on convergent evidence, that such anticipation may not only trigger preparation; it may also play a direct role in effort-based decision-making. 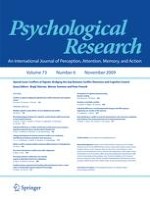 Individual differences in conflict-monitoring: testing means and covariance hypothesis about the Simon and the Eriksen Flanker task

Individual differences and developmental change in the ERN response: implications for models of ACC function