Merely seeing large objects (e.g., apples) potentiates power grip whereas seeing small objects (e.g., strawberries) potentiates precision grip. According to the embodied cognition account, this potentiation effect reflects automatic access to object representation, including the grip usually associated with the object. Alternatively, this effect might be due to an overlap between magnitude codes used to code manipulable objects and magnitude codes used to code responses outcomes. In Experiment 1, participants saw objects usually grasped with a power or precision grip and had to press keys either with their forefinger or with their palm, each response generating a low or high tone (i.e., a large vs. small perceptual outcome, respectively). Tones were automatically delivered by headphones after the responses have been made in line with the ideomotor theories according to which voluntary actions are carried out due to the anticipation of their outcomes. Consistent with the magnitude-coding hypothesis, response times were shorter when the object and the anticipated response outcome were of the same magnitude than when they were not. These results were also consistent with a between-experiment analysis. In Experiments 2 and 3, we investigated to what extent removing or switching the outcomes during the experiment influence the potentiation effect. Our results support that the potentiation effect of grasping behaviours could be due to the compatibility between magnitude codes rather than to the involvement of motor representations. Our results also suggest a spontaneous use of the magnitude of response outcomes to code responses, as well as the flexibility of this coding processes when responses outcomes are altered.
volgende artikel In your eyes: vision of the body alters touch perception in women with eating disorder symptoms 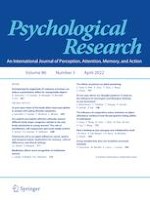 The impact of capitalized German words on lexical access

The effects of posture on mind wandering

The effect of binaural beat stimulation on sustained attention