We evaluated antenatal ultrasound (U/S) exposure as a risk factor for autism spectrum disorders (ASD), comparing affected singleton children and control children born 1995–1999 and enrolled in the Kaiser Permanente health care system. Among children with ASD (n = 362) and controls (n = 393), 13% had no antenatal exposure to U/S examinations; case–control differences in number of exposures during the entire gestation or by trimester were small and not statistically significant. In analyses adjusted for covariates, cases were generally similar to controls with regard to the number of U/S scans throughout gestation and during each trimester. This study indicates that antenatal U/S is unlikely to increase the risk of ASD, although studies examining ASD subgroups remain to be conducted.
vorige artikel The Co-Regulation of Emotions Between Mothers and their Children with Autism
volgende artikel Parent PDD Behavior Inventory Profiles of Young Children Classified According to Autism Diagnostic Observation Schedule-Generic and Autism Diagnostic Interview-Revised Criteria 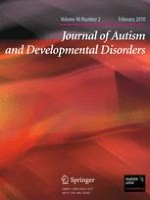