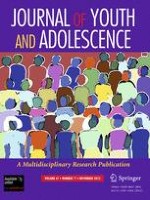 Association of Contextual Factors with Drug Use and Binge Drinking among White, Native American, and Mixed-Race Adolescents in the General Population

Immigrant Students’ Emotional and Cognitive Engagement at School: A Multilevel Analysis of Students in 41 countries

The Influence of Ethnicity and Adverse Life Experiences During Adolescence on Young Adult Socioeconomic Attainment: The Moderating Role of Education