An Investigation of the Effects of Brief Mindfulness Training on Self-Reported Interoceptive Awareness, the Ability to Decenter, and Their Role in the Reduction of Depressive Symptoms | mijn-bsl Skip to main content
ZOEKEN MENU 1 2 3 4 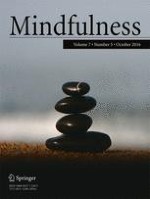 The ‚ÄúSense‚Äù of Time Passing

The Decoupling Model of Equanimity: Theory, Measurement, and Test in a Mindfulness Intervention