The aim of this experimental study was to examine whether interpretation biases are possible mechanisms of genesis of eating disorders (ED). We investigated the induction of an interpretation bias in healthy women using an Interpretation Modification Paradigm for ED (IMP-ED). We employed a modified version of the Word-Sentences Association Paradigm, with feedback reinforcing positive or negative responses to enhance either positive or negative interpretation, respectively. These two training conditions (n = 33 each) were compared to a no-feedback control group (n = 31). Effects on appearance-related self-esteem and body satisfaction as well as emotional vulnerability were measured in a subsequent Cyberball Ostracism Task (COT). Reinforcement of positive responses significantly reduced the endorsement of negative interpretations compared to the control group. Reinforcement of negative responses compared to no-feedback significantly decreased appearance-related self-esteem and reduced body image satisfaction compared to positivity training. The induction did not add to the deterioration in self-esteem, body satisfaction, and emotions experienced due to the COT. The IMP-ED successfully changed initial response tendencies by reducing a threat bias, and influenced core symptoms. Impacts of modifications of interpretation tendencies on emotional vulnerability and symptoms should be further studied in clinical samples, and could eventually inform the development of an efficient and economic online bias modification program.
vorige artikel Not Just Right Experiences, Disgust Proneness and Their Associations to Obsessive–Compulsive Symptoms: A Stringent Test with Structural Equation Modeling Analysis
volgende artikel Training Rejection Interpretation in Eating disordeRs (TRIER): Preliminary Findings of a Feasibility Study in Adolescents with Anorexia Nervosa 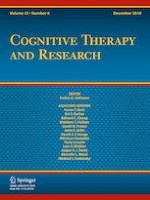