Three models of attachment relationships—the hierarchy model, the integrative model and the independent model—were compared in order to elucidate which best described the relationship between attachments to fathers versus mothers and its developmental consequences among 1,289 eighth grade students in Taiwan. These consequences included adolescents’ social support from family and friends, social expectations in peer interaction, self-worth, and depressive symptoms. The models can be summarized as follows: the hierarchy model assumes that paternal attachment is influenced by the level of maternal attachment; the integrative model assumes that the combined effects of secure attachments to mother and to father best predict the child’s development; and the independent model suggests that maternal and paternal attachments have differential influences on the child’s developmental outcomes. Our results indicate that the independent model best describes adolescents’ attachment relationships with parents and their subsequent developmental consequences. Moreover, gender differences were found in adolescent’s report of attachment to mother and father in relation with the outcome variables.

Titel
An Examination of Three Models of the Relationships between Parental Attachments and Adolescents’ Social Functioning and Depressive Symptoms
Auteur:
Yih-Lan Liu 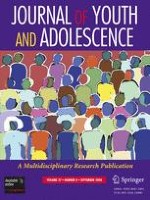 Course and Severity of Maternal Depression: Associations with Family Functioning and Child Adjustment

Pubertal Timing and Depressive Symptoms in Early Adolescents: The Roles of Romantic Competence and Romantic Experiences