General consensus among psychologists supports the beneficial effects of mindfulness in the treatment of a wide range of clinical conditions such as personality, mood, and anxiety disorders. Several scales used to assess this psychological construct, mainly rooted in Eastern traditions, are currently available to researchers and clinicians. However, the conceptualization and measurement of mindfulness has been considerably diverse. The present study examines the concurrent and incremental validity of four scales: the Philadelphia Mindfulness Scale (PHLMS), the Toronto Mindfulness Scale (TMS), the Five-Facet Mindfulness Questionnaire (FFMQ), and the Langer Mindfulness Scale (LMS). Two independent samples of 176 adults and 397 students, respectively, were recruited. With few exceptions, results were consistent across the two samples and indicated that measures based on an Eastern conceptualization of mindfulness (TMS, PHLMS, and FFMQ) show a different pattern of association with the chosen outcomes compared to the LMS, which is based on a Western conceptualization. Overall, the PHLMS showed the strongest predictive effects and the LMS the weakest in terms of both number of predicted criteria and average effect size. Implications for research and practice are discussed.
vorige artikel Reconsidering Criterion A for the Diagnosis of Non-Suicidal Self-Injury Disorder
volgende artikel Present Moment Contact and Nonjudgment: Pilot Data on Dismantling Mindful Awareness in Trauma-Related Symptomatology 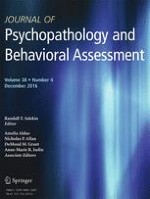