The symptom burden of heart failure is significant and impacts upon health-related quality of life. The Minnesota Living with Heart Failure Questionnaire (MLHFQ) is widely used in clinical practice to measure self-reported health-related quality of life, but the psychometric properties of the instrument are not fully elucidated. To address this gap, we investigated item and person fit, differential item functioning, item thresholds ordering, targeting and dimensionality of the MLHFQ.

Three approaches were used, exploratory factor analysis, Mokken analysis and Rasch analysis, on a convenience sample of 109 participants with a diagnosis of HF from the UK. Participants were typically male (67 %) with a mean age of 68 years (range 41–88).

Findings from the exploratory factor analysis of the MLHFQ revealed three factors (physical, emotional and social) that explained 72 % of the total variance. Mokken analysis confirmed the MLHFQ total scale, and the three subscales, as valid ordinal scales: the total MLHFQ scale [overall Loevinger coefficient (H) = 0.61], physical scale (H = 0.75), emotional scale (H = 0.79) and social scale (H = 0.552). Rasch analysis confirmed the physical scale as a unidimensional scale, but this was not consistent for the total MLHFQ scale which showed poor fit to the Rasch model (χ 2 = 162), df = 42, p < 0.0001). Six items of the total scale were misfitting (7, 8, 10, 14–16) and removing them improved the fit of the total scale. The physical subscale showed fit to the Rasch model (χ 2 = 20.24, df = 16, p = 0.21), and there was evidence of unidimensionality (t tests = 0.09, lower bound 95 % CI 0.04). There was evidence of disordered thresholds for the MLHFQ total and physical scale, and targeting was poor for both the total scale and its subscales.

We confirmed the MLHFQ subscales to be valid ordinal scales supporting the use of sum scores to assess quality of life in people diagnosed with HF. Floor effects were evident indicating that the ability of the instrument to identify differences across populations with mild HF may be suboptimal. The psychometric properties of the MLHFQ total scale may be improved by excluding problematic items from the total scale. Further research is warranted to verify findings from this study. 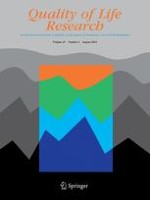 Environmental effects on WHODAS 2.0 among patients with stroke with a focus on ICF category e120

Getting serious about test–retest reliability: a critique of retest research and some recommendations

Anchoring vignettes for health comparisons: an analysis of response consistency