The Gilliam Autism Rating Scale was developed to identify individuals with autism in research and clinical settings. It has benefited from wide use and acceptance but has received little empirical attention. The purpose of this study was to evaluate the construct and diagnostic validity, interrater reliability, and effects of participant characteristics of the GARS in a large and heterogeneous sample of children and adolescents with autism spectrum disorders. 360 parent and teacher ratings were submitted to factor analysis. A three-factor solution explaining 38% of the variance was obtained. Almost half of all items loaded on a Repetitive and Stereotyped Behavior factor. The Developmental Disturbance subscale did not contribute to the Autism Quotient (AQ) and was poorly related to other subscales. Internal consistency for the three behavioral subscales was good but low for the Developmental Disturbance subscale. The average AQ was significantly lower than what was reported in the test manual, suggesting low sensitivity with the current cutoff criteria. Interrater reliability was also much lower than originally reported by the instrument’s developer. No significant age or gender effects were found. Level of impairment, as measured by adaptive behavior, was negatively related to total and subscale scores. The implications of these findings were discussed, as was the use of diagnostic instruments in the field in general.
vorige artikel Interval and Contour Processing in Autism
volgende artikel The Adult Asperger Assessment (AAA): A Diagnostic Method 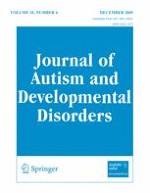 Teaching Children with Autism when Reward is Delayed. The Effects of Two Kinds of Marking Stimuli

Interval and Contour Processing in Autism